The NZLA is proud to have a long history and connection to the work of Dame Marie Clay, an educator and pioneer in promoting Literacy Practice.

Each year the MCLT generously provides funding for teachers to improve their Literacy practice through attendance of the NZLA National Conference. 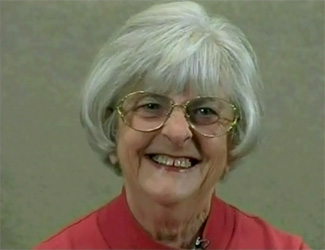 The following biographical information is located and copied from http://irrto.org/about-marie-clay/

Acknowledgement: This brief biography is adapted from the 1999 book, Stirring the Waters: The Influence of Marie Clay, edited by Janet S. Gaffney and Billie Askew. It is presented here with permission of Heinemann, Portsmouth, NH and the authors. The piece that appears on this website has been updated in a few places from text that appears in the original book.

Writing a tribute to Marie Clay is simultaneously an easy and an awesome task for exactly the same reason: She has accomplished so much, and her publications reflect the continuing change of her theoretical analyses between 1967 and 2001. That her influence transcends a single field of study and spans geographic borders is reflected in a single volume entitled Stirring the Waters from which this biographical snapshot is taken.

Born in 1926 in Wellington, the capital city on the southern tip of the North Island, Clay is uniquely New Zealand — frugal and resourceful. Although education is a top priority in New Zealand, funding for schools and research leaves no room for excess and spurs ingenuity and cooperation. Historically, the national curriculum was developed and revised by educators, with products of collegial work attributed to the New Zealand Department of Education rather than to individuals. From the beginning of their programs at a teachers college, pre-service teachers work in schools, and they apprentice with master teachers as they enter the profession. These cultural features are footholds in Marie’s work, as reflected in her concern for the “economic use of a child’s learning time” and the central role that collegial interactions play in professional development.

Clay completed her teacher training at the Wellington College of Education and was awarded a primary teacher’s certificate in 1945. At the same time, she was pursuing a bachelor of arts degree at the Wellington campus of the University of New Zealand. After graduating in 1946 with a senior scholarship in education that would support advanced study, she completed her master’s thesis, “The Teaching of Reading to Special Class Children,” and was awarded a master of arts degree with honors in 1948. At the same time, she was employed as an assistant psychologist for the New Zealand Department of Education. In 1950, Clay traveled to the United States on a Fulbright Scholarship and a Smith-Mundt grant to study developmental and clinical child psychology at the University of Minnesota’s Institute of Child Welfare. This she acknowledges as a turning point in her understanding of how to study children’s learning.

On her return to New Zealand, Clay moved to the small town of Wanganui and continued to teach in the elementary grades. Because of her interest in and expertise with children with special needs, the district placed many high-need students in her class. In 1955, Clay moved to Auckland and worked in the Department of Education’s newly established Psychological Services.

In 1960, Clay was offered a temporary position at the University of Auckland to assist with a new Diploma of Educational Psychology, a postgraduate training program for educational psychologists. Two years later, this became a permanent appointment. Clay continued to be involved in teaching developmental psychology, consultation, testing, and measurement to school psychologists for the next twenty-five years.

Around the time that Clay was studying in Minnesota, Samuel Kirk and Barbara Bateman were developing the Illinois Test of Psycholinguistic Abilities (ITPA) at the University of Illinois. This test was designed to guide remediation for children whose poor academic achievement was not attributable to intellectual, social, or emotional deficits. In the research, she found herself in disagreement with the assumptions underlying the ITPA and other special-education assessments. Clay’s developing criticism of the theoretical perspectives and the nature of instruction in the field of learning disabilities was a catalyst for much of her subsequent work. Her classic article, “Learning to Be Learning Disabled,” represents the culmination of her thinking on issues of identification, assessment, and teaching students with learning disabilities (Clay, 1987). Her challenges to current practice in preventing and recovering from literacy learning difficulties are no less relevant and urgent today than they were more than a decade ago.

In 1963, Clay began to investigate her doctoral research question, “Can we see the process of learning to read and write going astray close to the onset of instruction?” In her dissertation, “Emergent Reading Behaviour,” she describes the week-by-week progress of one hundred children during their first year of school (Clay 1966). An important outcome of her dissertation and subsequent research was the development of reliable observation tools for the assessment and fine-grained analysis of changes over time in children’s early literacy learning. These assessments constitute An Observation Survey of Early Literacy Achievement (Clay, 1993a), which has also been reconstructed and validated for the Spanish, Maori, and French languages. Clay’s observational methodology and clinical orientation arise from her training in developmental psychology and have kept her close to the source of literacy learning—the children and their teachers. This proximity may partially account for her perspectives on literacy learning, which differ, sometimes dramatically, from those of other researchers.

From her early research, she published Reading: The Patterning of Complex Behaviour (Clay, 1972), which changed through three editions and formed the basis of Clay’s theoretical description of young children’s developing control over literacy learning, as presented in Becoming Literate: The Construction of Inner Control (Clay, 1991). She has been a regular contributor to peer-reviewed publications (1967, 1970, 1971, 1974, 1985, 1987, 1997), a member of editorial committees for journals (such as the New Zealand Journal of Educational Studies, the New Zealand Psychologist, the Reading Research Quarterly, the Journal of Reading Behaviour, and the new Journal of Early Childhood Literacy), and she wrote an introduction to the fourth edition of Theoretical Models and Processes of Reading (Ruddell, Ruddell, & Singer, 1994).

A permanent and, by 1973, senior member of the University faculty, Clay maintained a high level of contact with children, parents, and educators. Among her many commitments, she was an early member of the Reading Association in New Zealand, president of the Auckland Reading Association in 1971-1972, and coordinator of the New Zealand Reading Association Councils from 1971-1974. Clay was the first non-North American to be elected president of the International Reading Association (IRA). During her term (1992-1993), Clay revitalized international participation in the work of the Association. As the 1995 recipient of the prestigious William S. Gray Citation of Merit, her contribution to invigorating the international emphasis of the IRA was acknowledged. “World-class scholar, researcher, and visionary educator, Marie Clay has inspired scholars, regenerated teachers, and touched the lives of children in all parts of the globe. An unwavering advocate for world literacy, she will always symbolize the I in IRA.” (Reading Today, 1995, 34).

Reading Recovery is one of Clay’s important contributions to education. Like the pattern of her work, the program emanated from close involvement with keen insight into those closest to the source. The research project was born from the concerns of classroom teachers who, despite well-designed classroom programs and good teaching, were not able to change the paths of progress for particular children. The driving question, stated with simple elegance, was “What is possible when we change the design and delivery of traditional education for children that teachers find hard to teach?” (Clay 1993b, p. 97.) It is early identification and instruction of these children, and not the classroom programs, that Clay has tried to redesign.

In 1976, Clay began to work—first with one research assistant, Sara (Sue) Robinson, then with a group of experienced primary educators including Barbara Watson—to develop an intervention that would bring the lowest children up to the average band of progress in their classrooms. These pioneers did not know then the possibilities that might be created for children, for teachers, and for schools with a different set of circumstances and assumptions.

Reading Recovery was developed and trialed in the short span of three years. Barbara Watson was appointed to the leadership team to contribute to this rapidly expanding effort. Field trials conducted in five schools in 1978 were replicated the following year in forty-eight Auckland schools. Reading Recovery became a national education program in New Zealand in 1983. Remarkably, Reading Recovery is now operating in most English-speaking countries (Australia, Canada, New Zealand, The United Kingdom, the United States, and other jurisdictions; Anguilla, Bermuda, Jersey, and U.S. Department of Defense Schools), and has been redeveloped for use in Spanish and French languages.

Clay’s role in developing and guiding the implementation of Reading Recovery is such a demanding and illustrious one that there is a danger that it will mask her accomplishments in other areas, including oral language (Clay, 1971; her first book, and Clay, Gill, Glynn, McNuaghton, & Salmor, 1983), writing (Clay 1975, 1987), and teaching-learning interactions that accommodate individuals with diverse starting points and rates of learning in typical primary classes (Clay, 1998). Although literacy learning has been an early and abiding focus of her work, Clay’s academic and intellectual curiosity has taken her along multiple paths of inquiry.

In 1980, Clay had her first opportunity for academic leave. In her report on this six-month sabbatical, she describes, among other things, an international conference on the study of counseling, a developmental psychology conference on the theme of language and cognition, and a scholarly search of the scarce and elusive literature on quadruplets and higher multiple births. The latter project culminated in a book with a catalogue of reported cases (Clay, 1989). In the spring of 1997, Marie spent an afternoon in Galveston, Texas in the home of Helen Kirk, who had been tracing the lives of twins and other children of multiple births for decades. The two women shared their fascination in nonstop conversation while Marie learned about the later lives of the siblings about whom she had written. Her developmental interest in adolescent psychology is manifested in the book Round About Twelve (Clay & Oates, 1983), which documents the interests, activities, perceptions, and behaviors of New Zealand youth on the threshold of adolescent changes. Clay’s lens, once again, is sensitively focused on individuals on the verge of change.

When Marie Clay became a professor of education in 1975, she was the first woman professor at the University of Auckland. Clay has been the recipient of many prestigious honors. In 1978, she was awarded the International Citation of Merit at the IRA World Congress on Reading. The following year, she received the David H. Russell Award from the National Council of Teachers of English for distinguished research in the teaching of English. The citation for this award concluded with the words, “Hers has been a quiet voice of reason in a field of frequently jarred by the conflicting cries of the marketplace. We do honor to the depth and scope of her scholarship and to the impact which it has made on the education of young children.” In 1982, Clay was inducted into the Reading Hall of Fame. She was the recipient of the Mackie Medal in Education from the Australian and New Zealand Association for the Advancement of Science (1983) and the New Zealand Association for Research in Education (1993). In 1993, she was also co-recipient, with Gay Su Pinnell, of the Dana Award for Pioneering Achievements in Education.

A major contribution of Marie Clay’s has been to change the conversation about what is possible for individual learners when the teaching permits different routes to be taken to desired outcomes. This conversation is now embedded in diverse international educational systems. Our thinking has been stretched in ways that make some former assumptions about the lowest-achieving children intolerable. We now live inside of a new agreement about what is possible…an agreement, a paradigm that did not previously exist and that will shape future actions and conversations.